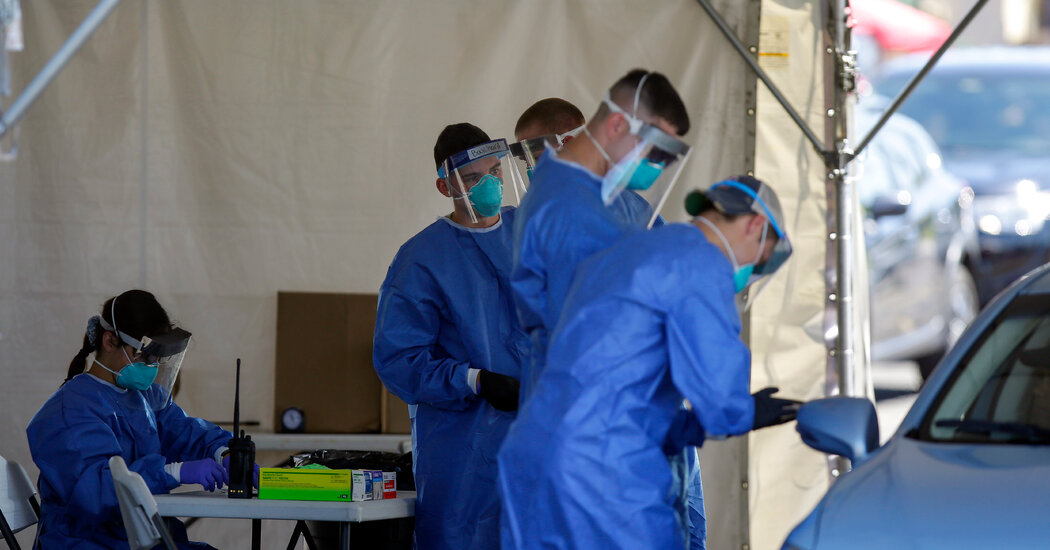 (Want to get this briefing by email? Here’s the sign-up.)

Here are the week’s top stories, and a look ahead

1. Coronavirus cases are rising in 40 states across the country.

More than 3,722,200 people in the U.S. have been infected with the coronavirus, and at least 139,955 have died, according to a Times database. The country, logging a seven-day average of 65,790 new cases a day, has more confirmed cases per capita than any other major industrial nation. Above, testing in Milwaukee.

Meanwhile, the White House is pushing to eliminate billions of dollars for coronavirus testing and tracing from a relief proposal drafted by Senate Republicans.

How did it get this bad? A Times investigation found that President Trump’s failure to contain the virus can be traced to mid-April, when the White House rushed to shift responsibility to the states.

Here are some takeaways from our reporters’ extensive reconstruction:

Key elements of the administration’s strategy were formulated by aides who for the most part had no public health experience and were taking cues from the president. They were increasingly dismissive of Dr. Anthony Fauci, the nation’s top infectious disease expert.

Dr. Deborah Birx, a highly regarded infectious diseases expert, became the chief evangelist in the West Wing for the idea that infections had peaked and the virus was fading quickly.

The White House was slow to recognize it had been wrong. Even now there are internal divisions over how far to go in having officials publicly acknowledge the reality of the situation.

The study of nearly 65,000 people found that children younger than 10 transmit to others much less often than adults do, but the risk is not zero. And those between the ages of 10 and 19 can spread the virus at least as well as adults.

Experts cautioned that the findings could mean clusters of infection in children of all ages. The director of the Harvard Global Health Institute called the study “one of the best” to date on the issue. Several school districts around the U.S. announced plans this week to start the academic year online, including Los Angeles, above.

Separately, the Food and Drug Administration issued its first emergency approval for pooled testing, a method that allows for much faster tracking of new infections.

3. We remember Representative John Lewis, the towering figure in the historic struggle for racial equality. His colleagues called him “the conscience of Congress.”

Mr. Lewis, a Georgia Democrat, announced in December that he had Stage 4 pancreatic cancer. He died on Friday at the age of 80.

On the front lines of the bloody campaign to end Jim Crow laws, Mr. Lewis, pictured above in 1967, was repeatedly beaten by Southern policemen and arrested 40 times from 1960 to 1966. He was one of the original Freedom Riders, and the last surviving speaker from the March on Washington in 1963. You can read his full obituary here.

A half-century later, Mr. Lewis saw the demonstrations in response to the killing of George Floyd as a continuation of his life’s work. “There will be no turning back,” he said in one of his final interviews.

Praise for the civil rights icon poured in from political leaders and activists. President Trump, whom Mr. Lewis regularly criticized, expressed his condolences on Twitter.

4. The federal agents deployed in Portland, Ore., were not specifically trained in riot control or managing protests, an internal Department of Homeland Security memo warned this week.

The message was prepared for Chad Wolf, the acting secretary of Homeland Security, as he arrived in Portland on Thursday, according to a copy of the memo obtained by The Times. Without markings or identification, agents have seized and detained protesters, patrolled the streets in unmarked vans and unleashed tear gas.

The extraordinary use of federal force, billed as an attempt to tamp down weeks of persistent unrest and protect government property, has shown the department’s broad legal authority to crack down on American citizens. Gov. Kate Brown of Oregon has called the response “a blatant abuse of power.”

What’s happening in Portland, a conflict reporter there told our Opinion writer, is “as close up to the line as you can get to actual war without live rounds.”

5. The buying of beans became a political act this week.

Goya, the nation’s largest Hispanic-owned food company, went from beloved to the bane of many Latino households in the U.S. after its chief executive praised President Trump at a White House event. The boycott and counter-boycott of Goya comes as the major political parties seek to shore up Latino support ahead of the 2020 election. Above, a distribution center in Brookshire, Texas.

After weeks of trying to determine the best way to go after Joe Biden, and facing faltering poll numbers, Mr. Trump’s campaign has in recent days intensified a tear-down operation with an explosion of different lines of attack, many of them false.

6. The coronavirus has affected the work of many people in wildlife conservation and management. That includes the “bear whisperer” of Mammoth Lakes, Calif.

As a former wildlife officer, Steve Searles used nonlethal tactics to help some bears change their ways, inspiring or training other communities to try similar approaches. “I never met a bear that couldn’t learn,” he said. “I mean, I don’t try to teach bears geometry or how to ride a unicycle.”

He quit his post after the pandemic led to cuts in the town’s budget. His is just one story of how the coronavirus has thrown a wrench into the managed balance between wildlife and humanity, just as more people are heading outdoors.

7. The report this week of rampant sexual harassment within the Washington N.F.L. franchise shocked many.

But diversity and inclusion advocates who had counseled the N.F.L. on workplace culture issues were not surprised that 15 women told The Washington Post of their harassment claims against male co-workers. One of the advocates said that until the league fully addresses its toxic relationship with women, “those stories will keep coming.”

And a year from now, the world will begin to gather in Japan to celebrate the postponed opening of the Tokyo Olympics — maybe. The unpredictable nature of the coronavirus is making it impossible for officials to say definitively that the Games will happen. Here’s where things stand.

8. Americans knew her as Aunt Jemima, but her name was Nancy Green.

Born into slavery in 1834 east of Lexington, Ky., Green won her freedom and was hired as a nanny and housekeeper for a family in Chicago. In 1890, Green was recruited as the original face of the pancake company.

Aunt Jemima, the character, would outlast Green for another 97 years until last month, when Quaker Oats announced her retirement, acknowledging that the brand was built on racist imagery. (The erasure is the focus of this week’s episode of “Still Processing”).

Green, who was killed in an auto accident in 1923, never received a Times obituary, until now. “She would want the real story to be told of her and the ladies that came after her,” her great-great-great nephew said.

9. We’re in the throes of summer, but it’s already time to start thinking about fall planting.

Now is the moment to order spring-flowering bulbs, our garden expert writes. There’s only so much inspiration a catalog photo can provide, so she turned to the staff at the Chanticleer Garden in Wayne, Pa., which calls itself a “pleasure garden,” and is known for its creative use of plants. Here’s what they recommend.

During a recent move, an illustrator made some floral discoveries pressed between the pages of her books. She recreated them into these beautiful images.

10. And finally, dig into one of our Best Weekend Reads.

A changing of the guard in the publishing world, why Thailand has been spared in the pandemic, a check-in with the piano man of Washington Square Park in New York City, above, and more great stories top this week’s roundup.

For more ideas on what to read, watch and listen to, may we suggest these 10 new books our editors liked, a glance at the latest small-screen recommendations from Watching, and our music critics’ latest playlist.

Have a pleasant week.

Your Weekend Briefing is published Sundays at 6 a.m. Eastern.

Did a friend forward you the briefing? You can sign up here.

What did you like? What do you want to see here? Let us know at [email protected].