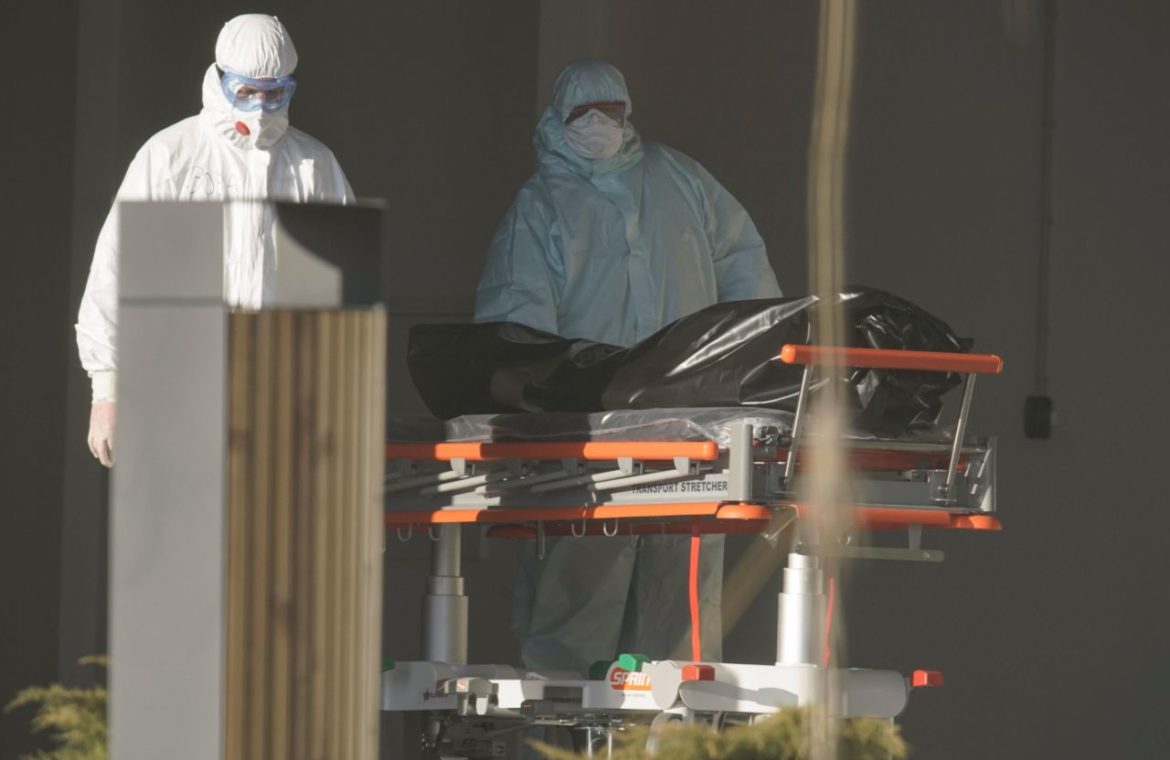 Medical specialists push a stretcher likely carrying a human body outside a hospital for patients infected with the coronavirus disease (COVID-19) on the outskirts of Moscow, Russia, April 12, 2020. TATYANA MAKEYEVA/REUTERS

Moscow – Less than a month ago Russia’s state-controlled media showed President Vladimir Putin talking about how the country had managed to contain the new coronavirus and keep the situation “under control.”

Russia had only a few dozen officially reported cases then. A week later, Russia even sent planes loaded with medical aid to struggling Italy, and then to the United States and Serbia.

But Russia has now seen a surge in COVID-19 infections, and Putin’s tone has become much less optimistic.

“We are seeing that the situation is changing every single day and regrettably not for the better,” he said Monday during a video conference with senior health care officials. “The number of sick people is increasing along with the number of serious cases.”

He acknowledged that Russia has not yet hit the peak of its epidemic, not even in hard-hit Moscow, where two thirds of the cases have been diagnosed.

Ambulances queue before driving onto the adjacent territory of a local hospital amid the coronavirus (COVID-19) pandemic in Khimki outside Moscow, Russia, April 11, 2020. TATYANA MAKEYEVA/REUTERS

On Tuesday, the country’s virus task force reported a total of 21,102 infections and warned that Moscow will soon face a shortage of hospital beds.

The city has been reorganizing more and more of its hospitals to expand the number of beds for coronavirus patients, and a new hospital is rapidly being built, but it’s unclear if that will be enough.

Deputy Mayor Anastasia Rakova said last week that Moscow’s hospitals and ambulances were already stretched to the limit. Videos and photos emerged on social media last week showing lines of dozens of ambulances waiting for hours outside the hospitals. The video was even picked up by state-run media.

“In six years I haven’t seen anything like that,” one ambulance driver wrote in a Facebook post Friday, under pictures of a long line near the hospital outside Moscow.

The task force put out a statement this week warning that despite the growing number of state, federal and private clinics joining the effort, there could be a shortage of hospital beds in the next two to three weeks in the capital.

In interviews on Russian media, doctors and nurses from across the country have complained, often anonymously, about shortages of personal protective equipment (PPE), and a lack of guidance.

Due to the growth of the outbreak, Moscow and the surrounding region will introduce a digital permit system from Wednesday, aimed at limiting residents’ movement and enforcing the lockdown.

Residents now have to request permits for all journeys by public or personal transport. The system has been criticized by some opposition activists as another way for the government to breach privacy rights. Moscow’s tracking policies have often been compared to China’s, as the city’s law enforcement has been using facial recognition technology and a large network of cameras to track people’s movements and catch quarantine violators.

Meanwhile, China has said nearly half of newly detected COVID-19 cases in that country are now coming across the border from Russia – mostly Chinese nationals returning home.

Chinese cities along the border with Russia have tightened border controls and imposed stricter quarantine measures amid fears of a possible second wave of the virus in the country.

Governor Cuomo: “This is no time for politics” over coronavirus